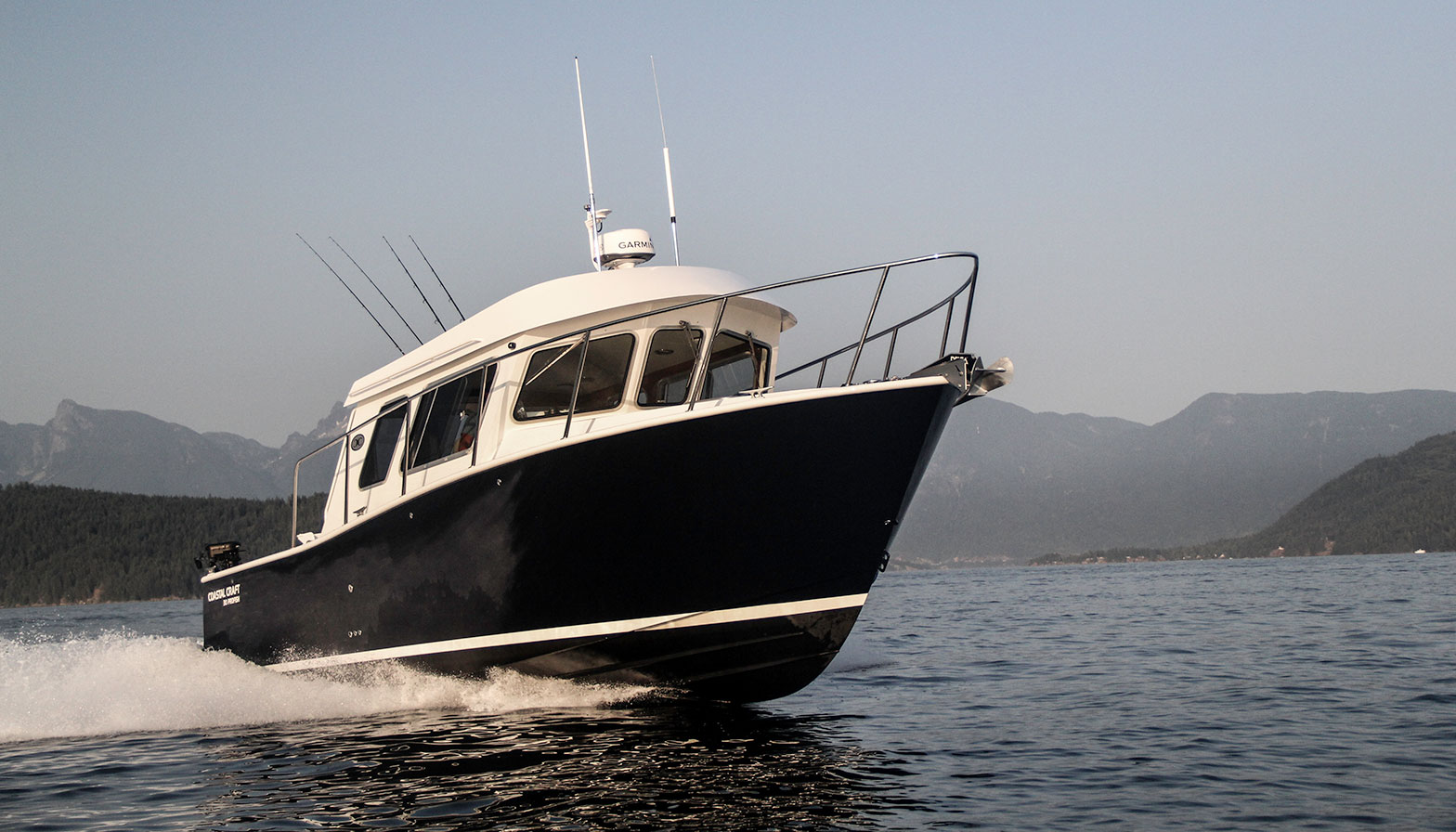 It’s a rare thing to find a truly luxurious finish—inside and out—on an aluminum, outboard-powered sport fishing yacht, but Coastal Craft’s 30 Profish has done just that. Its 40-knot top speed, open cockpit with room to play the largest of fish, dedicated fish cleaning station and huge storage lockers are all plusses that will appeal to fishers. However, at the same time, the 30 Profish has all the attributes that have earned Gibsons-based Coastal Craft a top spot in the luxury aluminum boatbuilding market—beautiful lines, immaculately faired and painted hulls, exceptional fit and finish and excellent high-speed performance. In fact, it’s somewhat of a misnomer to target this yacht for the sport fishing market as the new Profish is equally well suited for non-fishers who want the benefits of speed, economy and quality in a small, easy-to-handle yacht.

Design and Construction
The 33-foot, six-inch (10.2-metre) long hull is based on the same proven design that the company used in the late 1990s, during its early years building mainly water taxis and commuter boats. Those early vessels were typically powered by a single 370-horsepower Volvo Penta D6 diesel with stern drive. The new 30 Profish is powered by twin 350-horsepower Mercury Verado gas outboards. According to Jeff Rhodes, CEO of Coastal Craft, the reasoning for going to outboards is that today’s outboards are reliable, convenient, fuel-efficient and have excellent warranties. Also, because they are mounted on the back of the boat, they allow for more interior room. They also weigh considerably less than inboards (about 700 pounds in this case). Additionally, today’s consumers prefer outboards and Coastal Craft is moving to fill that niche.

Another change from the original hull is that the swim platform is now integrated into the hull and this increases the waterline length by 24 inches. The use of outboards has also freed up room in the cockpit and under the sole, which means more storage and more room for fishing (or simple lounging).

The Profish 30, like other Coastal Craft, is constructed of fully-welded aluminum in a jig with a beefy structural grid of ribs and stringers. The hull is then sprayed with two-part, fire-retardant polyurethane foam that reduces sound and condensation. All non-aluminum parts and fasteners are isolated using rubber, silicone or non-conducting grease to eliminate galvanic corrosion. Many of the components—such as the forward and main cabin—are built as modules externally, which are dropped in and connected, which is much more efficient than “stick” building each of the components in place.

On Deck
The relatively low-sided cockpit bulwarks and slightly-raised self-draining cockpit make it easy to step aboard, though hull side doors are an option. The cockpit is spacious and clean, with nothing to get in the way of fishing gear and lines. All deck hardware, including cleats and rod holder and downrigger mounts are interchangeable Burnewiins and are flush to the top of the bulwarks. One special feature is a custom made (by Coastal Craft) removable fish cleaning table that fits on the top of the transom. Lockers built into the cockpit sides and transom provide storage for tackle, fenders and so on, as well as access to the fuel filters and battery switches. One large hatch in the cockpit sole opens to a generous fish locker (for those giant spring salmon) with a diaphragm discharge pump. Another large hatch reveals a large dry storage area. A third leads down to the aft machinery spaces. Rods are stored in rocket launchers on the cabin top. Well-placed cabin-side grabrails and outside handrails combine with wide (11-inch) side decks to make it easy and safe to move fore and aft. At the pointy end are the requisite anchor, anchor roller, windlass and chain locker. The cabin top offers plenty of space to tie down traps and other gear.

Interior
The saloon of the test boat is entered via a heavy watertight door. The interior is fitted out with rich, horizontally-grained black walnut doors, cabinets and trim which contrast nicely with the beige Ultraleather upholstery and dark, vinyl plank flooring. There’s six feet, six inches of headroom and overhead, soft upholstered ceiling panels help bring a warm ambiance to the saloon. Four forward-sloping, aluminum-framed windows (two are opening), and a three-panel windshield provide good light and ventilation. Vetus clamshell vents in the cabin top help keep air circulating and moisture out when the vessel is not in use. The layout is somewhat traditional, with a raised dinette to port and a table that lowers to become a second berth. The linear galley is to starboard and includes a Corian countertop, deep stainless sink, Wallas single-burner diesel cooktop, microwave and a 4.2-cubic-foot Nova Kool fridge/freezer.

The raised helm area is fitted with hydraulic power steering and electronic engine controls along with Optimus 360 joystick steering with the system’s virtual anchoring function. The full Garmin navigation package includes a 16-inch touch screen, VHF with AIS, radar, sounder and autopilot. Digital outboard engine readouts and a bank of rocker switches tie it all together. The sliding window to starboard gives extra visibility when coming alongside. Visibility from the helm, all round, is very good.

Across from the helm is the companion seat. The fold-down table fronting it is a smart and useful feature. Its backrest cleverly flips over to serve as the backrest for the forward dinette seat.

One of the most surprising aspects of the saloon is the huge storage area under the cabin sole. It’s about eight feet long and 30 inches wide and provides access to some of the mechanical systems. Most impressive is that there’s also room for half a dozen or so large plastic storage totes plus more storage on outboard shelves.

The steps to the accommodation area, the inboard edge of the dinette table and the step up to the helm all have well-designed aluminum treads inset with rubber, which pretty well eliminates any chance of slipping.

The V-berth is a full six feet, six-inches long and a privacy door separates it from the rest of the vessel. The walls are nicely upholstered and give a warm and cozy feel. There is good storage in drawers underneath the bed. To port is the head with shower and small sink and vanity while across the companionway is a large hanging locker. Three-zone heating is provided by Espar diesel forced air, which also acts as a windshield defroster.

A generator is optional, but with two Group 31 house batteries and two 24-series engine start batteries combined with minimal power demand from ship’s systems, a generator should not be necessary. The exception would be when reverse cycle air or additional large-power-draw equipment is added. The two 135-gallon (511-litre) fuel tanks are aluminum and built by well-known tank builder Florida Marine Tanks. A plastic 27-gallon (102-litre) diesel tank provides fuel for the Wallas stove. A 40-gallon (151-litre) plastic water tank is standard. An optional 120-gallon (454-litre) stainless tank can be configured to carry extra water or fuel. Coastal cruisers will likely opt for the extra water capacity, while sport fishers travelling long distances will prefer the extra fuel.

Underway
We were loaded with full fuel and water aboard as Rhodes and I departed Gibsons Marina. We did our fuel test runs in the protected waters behind Keats Island. Acceleration was impressive with no prop slip or cavitation. Bow rise was minimal and the Profish was quick to settle onto the plane. Visibility was very good all round. Trim was controlled by the outboards trim function as well as Zipwake’s dynamic trim control system. The Zipwake is similar to the interceptor-type Humphries/Volvo Penta trim tabs and this was the first time I’d used them. They proved intuitive and their automatic trim setting worked well. The Profish carved nicely into high-speed turns without slipping. At a slow plane of 13 knots (3,200 rpm) we were burning 14.2 US gallons per hour (53.8 lph). A slow cruise was at about 22 knots (3,900 rpm) while burning 19.6 gph (74.2 lph). A fast, but comfortable cruise was just over 33 knots (4,900 rpm) while burning 33.6 gph (127 lph). Wide-open throttle was 6,000 rpm, which bought us to our top speed of 42.5 knots. Up to about 38 knots, we were travelling between 1.1 and 0.85 miles per gallon (0.29 to 0.22 miles per litre). This translates to a range of close to 300 miles.
Once the fuel figures were compiled, we headed out into the Strait of Georgia where a 15 to 17-knot westerly was blowing, and this was raising seas of two to three feet. Despite the conditions, the 30 Profish gave a surprisingly comfortable ride, even at 30-plus knots. The motion could perhaps best be called predictable, which is a good thing. We stayed surprisingly dry upwind and the very responsive helm made it easy to dodge the large numbers of logs and other debris. Heading directly downwind the Profish tracked well. When quartering the waves there was no tendency to slew or broach. Overall, the Profish handled the seas extremely well regardless of our orientation and there was no pounding or jerky movements.

Concluding Remarks
The 30 Profish is an extremely capable, easy-to-handle and well performing yacht. No doubt it will make an excellent fishing platform, but it also has all the luxurious attributes that have made Coastal Craft such an iconic aluminum builder. One certainly doesn’t have to be a fisher to appreciate its cruising amenities. It should be noted that the owner of the first 30 Profish was from Alaska and he wanted a stripped-down version with no paint or fairing on the hull. This shows that Coastal Craft will work with customers to give the degree of finishing they want, or don’t want. Price as tested for the fully outfitted version, is $410,000 US. For those who want a slightly larger version of the 30, several 33-foot Profish models are under construction and those extra three feet go into lengthening the saloon. 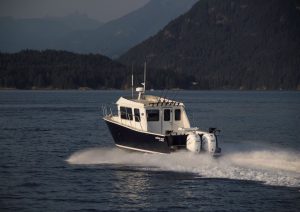 The Specialty Yachts 2020 Rendezvous has been cancelled for this year.