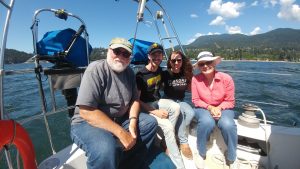 It turns out selling a boat that you’ve owned for twenty-five years, that was perfect for you, and into which you’ve poured much treasure and heart, is really very hard.  The good people at Specialty Yachts took much of the sting out of the process.

When we first approached them about listing the boat, they took a long, careful look at her, considered what price she might command, and ascertained through lengthy conversation with us that our expectations were not unreasonable.  They told us they were confident they could sell her and would be pleased to represent her.  While we were interested in getting full value for the boat, we were perhaps more interested in seeing we found purchasers for her who would treat her as we had, and prize her as we had.

Darren and his colleagues found us purchasers who exactly fitted that description within a few months.  The poking and prodding of the mechanical and out of water surveys, and an extensive sea trial followed, all carefully overseen by Darren in as efficient and effective manner as we could have expected.  Similarly, financial and legal aspects of the transaction were painlessly completed.

Finally, the new owners pulled the boat out of our slip to take her to theirs, tears were shed, but there was little Darren could do about that and we hadn’t expected him to.

We would have no hesitation in recommending Specialty Yachts brokerage services and anticipate we will ourselves be using them again.