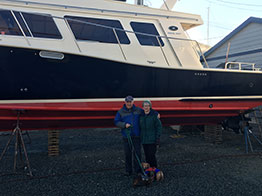 We have been involved with Lawrence and Specialty Yachts since the purchase of “Angela’s Grace” — a Hunter 380 which served us very well for seven years until it was time to acquire something with fewer sails and more engines. With his assistance we looked at various older but acceptable power boats but none of them clicked with us for various reasons. It was then that Susan suggested we look for more of an “investment” in a boat. (OK we know no boat is normally an “investment” per se but our attitude change helped immensely in discovering exactly what we wanted.) Wouldn’t you know that such a vessel was in Lawrence’s stable!

We are proud to be the new owners of what appears to be an almost new Coastal Craft 40 (actually 46’ LOA). It is in superb condition with a new set of engines/stern drives along with an extraordinary amount of upgrades and extras too numerous to list. The surveyor said its condition gave the impression it was a two year-old boat — not one built in 2005. We are seriously looking forward to heading farther up the coast than we had hitherto been able to achieve.

Our thanks to Lawrence for helping us to acquire a boat which meets the criteria for a “good investment” as well as any boat can be said to do so. He kept us focused on the end-state while facilitating discussions with the previous owners, service providers, CBSA, CBP and other parties. And now it is “our boat” (or as they say in Latin, “CYMBA NOSTRA.”).

Many thanks to Lawrence and the crew of Specialty Yachts!!